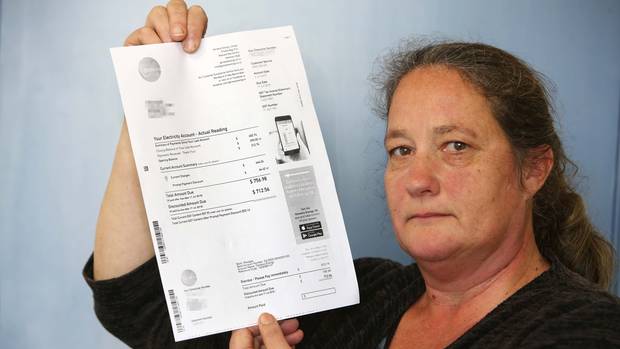 As a result of this article we have had several donations from the community.

Even setting aside weekly payments, a mother of six cannot get on top of her power charges - her latest bill and arrears totalling an eye-watering $756.

Her struggle with winter power bill mirrors that of thousands of people on low to middle incomes throughout New Zealand and the situation gets worse every year.

A nationwide survey by the Salvation Army ahead of its Winter Appeal that started on Monday found that close to one in two New Zealanders have gone without heating in the past year, or put off going to the doctor because they didn't have enough money.

The Whangārei woman, who wished to remain anonymous, is paying $450 a week in rent for a three-bedroom house and says her family is left with very little to survive on after the bills are paid.

Her actual electricity bill for June was $444 plus arrears of $312.

She works in a non-teaching role at a pre-school as and when required while her partner cannot work due to falling health.

Despite being in receipt of a number of benefits, including Winter Energy Payment and rental supplement, her family is living day-by-day.

The Ministry of Social Development pays $31.82 a week or $127.28 a month in winter energy payment to a couple with dependent children.

"We just have a plug-in heater in the lounge. If I could afford to have more, I would.

"There's a fireplace but we don't have wood to burn. There's no other form of heating in the house.

"My kids just have extra blankets and stuff to keep them warm. I turn everything off at night and try to save power but I can't," she said.

Her family switched power company - from Contact to Genesis - and although that helped, she received a bill of $550 last month which was the highest from her current electricity provider.

Her typical power bill outside of winter months are between $350 and $400 a month.

"Contact's bill was a lot higher and I got WINZ to help pay their bills despite paying $100 a week. Now I am paying $75 a week but still can't get on top of my power bill," she said.

She suspects the biggest power consumption was washing machine which she used three times a day and fridge.

Two of her children receive blankets, warm clothes, socks and jackets from Variety, a charity that provides kiwi kids with winter essentials.

She's trying to get two other children into the programme, which has a long waiting list.

Whangarei Budgeting Services co-ordinator Clarke said driers and heaters were biggest guzzlers of power and that a lot of landlords were not having fireplaces anymore.

"People should put aside money every week into an account that they can't touch and add additional money. It's about planning and repaying your bills when they become due," she said.

People can donate to the Salvation Army's winter appeal by visiting salvationarmy.org.nz/winterappeal.

Five ways to save power and estimated savings per year:

* Dry clothes outside rather than using a dryer - about $200

* Switch your appliances off at the wall when not in use - varies.

* Shut your curtains at dusk to keep the heat in - varies.

Story via The Northern Advocate
https://www.nzherald.co.nz/northern-advocate/news/article.cfm?c_id=1503450&objectid=12094954